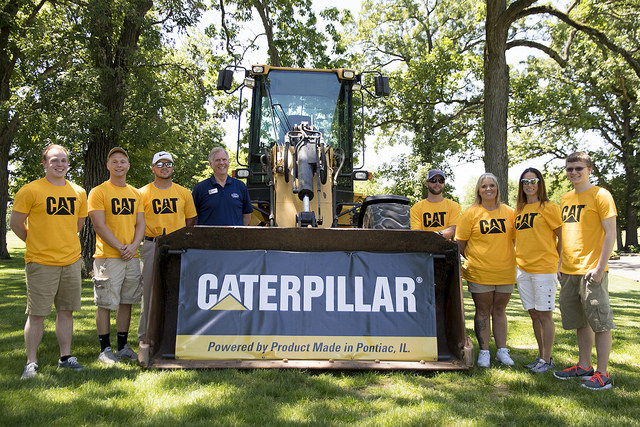 Caterpillar Engine Systems and the Heartland Community College Foundation hit a new fundraising record at the eleventh annual Scoring Fore Scholarships golf outing. The event brought in more than $61,500 which will fund eight full-ride scholarships for the upcoming school year.

Scoring FORE Scholarships raises funds for Heartland students from Livingston County. Since its start in 2006, the outing has raised more than $390,000 and has granted 37 scholarships. Held at the Elks Lodge in Pontiac on June 2, this year’s event included 50 teams and is the highest grossing singular fundraising event ever hosted by the College.

“As higher education becomes more important to the success of our national and local economies, Caterpillar and their partners are opening even more doors for our leaders of tomorrow,” said HCC Foundation Executive Director, Chris Downing. “Their impact will be seen throughout our community for decades to come.”

Event participants included Caterpillar suppliers, customers, employees and retirees, as well as HCC partners and local community members. “I’m so proud of the role that Caterpillar played in this record-setting event,” said Product Manager for Caterpillar Engine Systems, Susan Toher. “We are deeply committed to engagement in the local community, and this opportunity to support education in STEM (science, technology, engineering and math) and business-related education at Heartland fits perfectly into our Caterpillar values. Once again, I was humbled by the enthusiastic participation from our employees and retirees, suppliers, local businesses and the Heartland Community College Foundation team.”

The Caterpillar Scholarship covers tuition, fees and books for up to four semesters. Current recipients include Trevar Moran, Jean Murphy, Bobbi Leacock, Corban Roberts, Robert Shelby, Ryan Shoemaker and Darin Winkler-Trout. Livingston County students interested in the scholarship should visit the Foundation's website. Applications for the 2017-18 school year are due by July 1.