Employee on trip to stratosphere

Stacey Shrewsbury is on the trip of a lifetime.

As lead flight director of the Challenger Learning Center, Shrewsbury takes simulated trips to planets all the time. This week, she’s headed to the stratosphere (about 45,000 feet up) to get a close look at space.

It’s all part of SOFIA (Stratospheric Observatory for Infrared Astronomy), a partner program between NASA and DLR, the German Aerospace Center. Based at the NASA Ames Research Center in Moffett Field, CA, SOFIA is a Boeing 747SP aircraft and is the largest airborne observatory in the world. It includes a telescope that allows scientists and researchers to make observations that would be impossible with even the highest and largest ground-based telescopes.

According to Shrewsbury, everyone on board SOFIA flights might have a different element they want to observe. For her trip the week of March 6, she’s taking a look at the process for how old stars get recycled into new stars.

“They are fascinating,” Shrewsbury said. “As a star dies, it gives up its elements for new stars. This concept seems beyond our reach but with SOFIA, I’m hoping we can get a better understanding of the galaxy, the universe and our own solar system.” 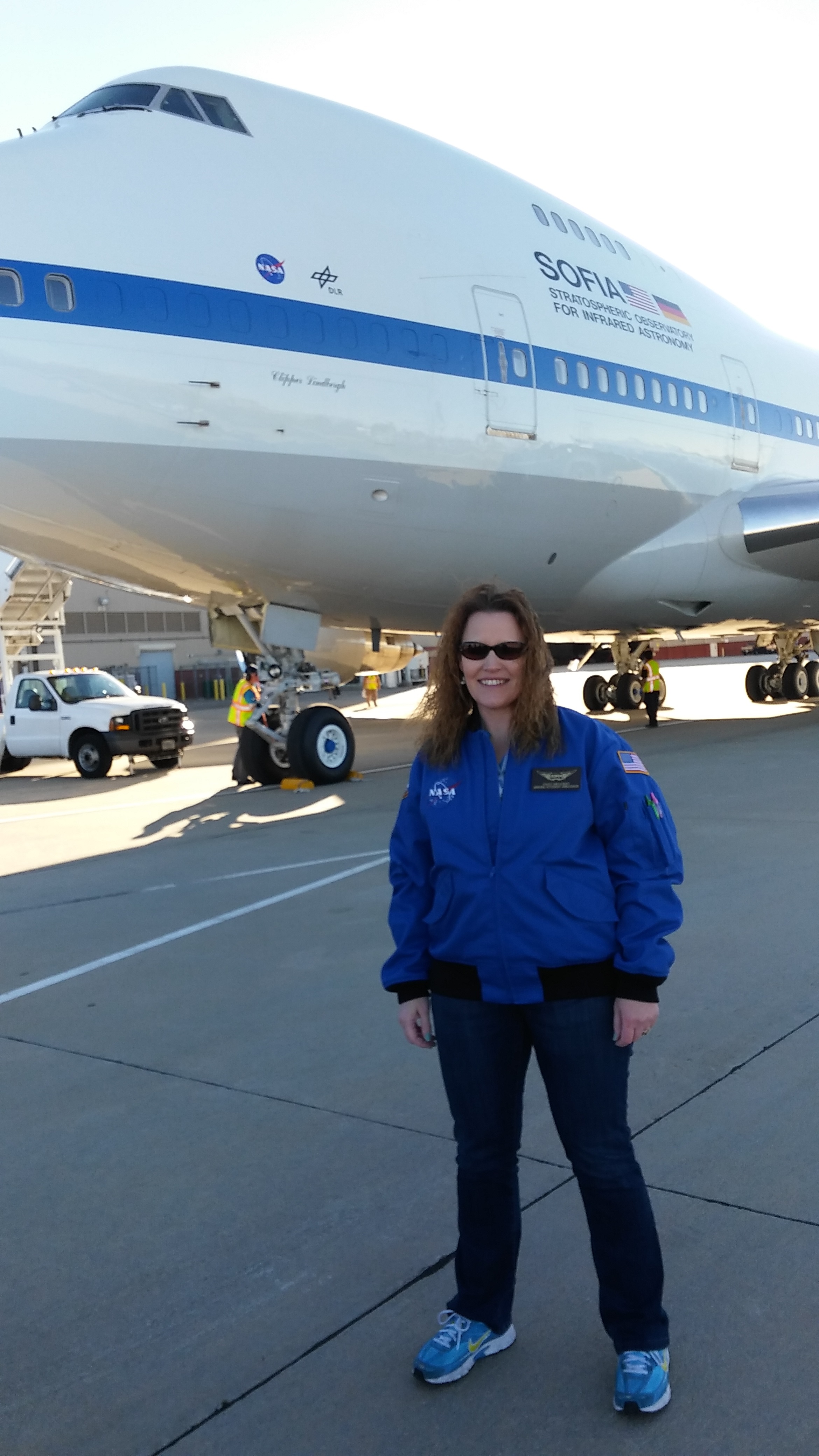 She also hopes to have a better appreciation for how we’re able to use telescopes beyond what the visual eye can see. “The electromagnetic spectrum is interesting. I want to learn more about how energy works and how it moves.”

Shrewsbury is part of the fourth cycle of teachers to go aboard SOFIA and will be accompanied by three other teachers, a flight crew and a handful of scientists. To get selected for the flight, Shrewsbury first applied to be an ambassador for SOFIA called the SOFIA Airborne Astronomy Ambassador Program. As a requirement for the program, Shrewsbury, an informal educator, partnered with a classroom teacher. Her partner was Jennifer Hubble-Thomas, a teacher from Williamsville, IL. Together, the pair did a variety of outreach programs, such as Day of Play in September 2015 and talked about Challenger Learning Center programs in the classroom.

Once they were selected for a SOFIA flight, they had to enroll in an online, college-level class through Montana University to prepare. Both look forward to bringing their SOFIA experience back to the students.

It’s certainly a unique opportunity to travel to the stratosphere and utilize specialized telescopes, but so is the timing of their flight. “This is the last time NASA is gathering educators in this format,” Shrewsbury said. “The next round will include California teachers because that’s where it’s based.”

In addition to the flight, Shrewsbury will get a tour of SOFIA’s instrument lab and will also stop by Blackbird Airpark, an annex of the Air Force Flight Test Museum. Additionally, she’ll head to the California Science Center where the space shuttle Endeavor is located.